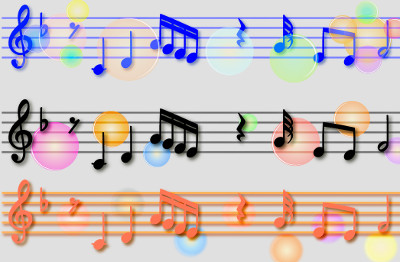 I should humbly note that I may not be wise enough to know how practical these ideas are.

The goal is to have an environment for computer-aided music composition.

1. Logarithmic Display. Display audio tracks in a logarithmic-frequency spectrum vs. time format, rather than the usual linear FFT. Show both frequency and time precision by calculating transforms with sufficient frequency resolution and those with time resolution and superimposing them by adding or multiplying the points. Color-code the frequencies as hues according to musical scale degree, with brightness corresponding to amplitude. C can be red, C# red-orange, and so on through red-violet for B, with E as yellow and G# as blue, interpolating linearly.
2. Audio Analysis. Analyze polyphonic audio data into note and instrument data. Introduce a new instrument plug-in architecture where instruments can respond to analysis data in order to suggest a patch which most closely resembles the recording. The host can then offer a sorted list of candidates among the installed instruments.
3. Midi Analysis. Analyze note data in a Schenkerian-like format, sufficient to capture parameters interesting for music composition theory; define user-supplied rules, interactive assistance, or fully automatic analysis by emphasizing the rules and order which will result in the most elegant description of the music. Form style libraries with the ability to distill compositional and instrument patterns common to more than one song.
4. Re-synthesis. Remix existing songs or combine elements from multiple songs and styles to algorithmically compose and orchestrate new songs, with interactive control to a variable extent.
5. Combination Action. Perform live using a combination action that works like a pipe organ: define presets, each triggerable by a midi event, that change the connections between one or more input midi channels, each with their respective multiple layers of instrument channels. If the re-synthesis engine can accompany the live performance and respond to it, so much the better.
6. Always-On Recording. Never lose a take again! If all live midi data are automatically recorded, presumably performance anxiety will abate after a while. Then the user can grade takes that are in the zone, and paste them into the song. Preserve live instrument preset information, and time codes relative to song playback, in the history.
7. Undo From History. Who hasn't wished to undo a change made several steps ago? Keep a persistent history of changes to a song. Edit the changes by selecting a change from the history, not just the most recent change, and calculating the dependencies needed to apply the desired edit to the current version, re-applying changes that came later. Add the calculated edit as a new change. Filter and find historical changes by selected song element(s).
8. Affordability. Able to be acquired by the casual home hobbyist.

OK, that wasn't quite ten; but, it should be enough for a start!

What do you think?

Image by AnnaliseArt from Pixabay


If you wish to publicly respond in print, please feel free to Sign Our Guestbook.